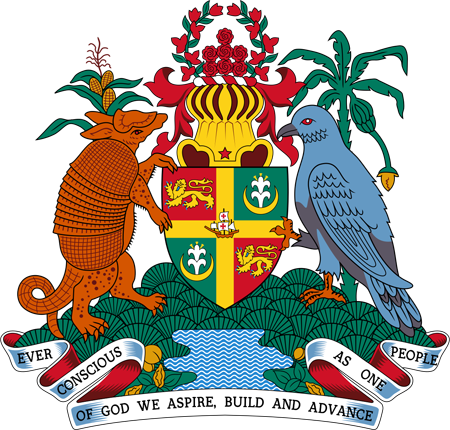 The Coat-of-Arms represents the distillation of a national effort to produce armorial bearings for an independent Grenada, incorporating important historical and indigenous features of Grenada, Carriacou and Petite Martinique, in a design approved by the College of Arms.

The Coat-of-Arms comprises:
The National colours of Red, Gold and Green, which comprise the National Flag, are used on the shield with the same symbolism attached to them.

The ship Santa Maria at the centre point of the shield and Gold Cross represent Grenada’s sighting by Christopher Columbus, and our continuing link with yachting and tourism.

The Gold Cross itself is significant of God consciousness which underlines the national effort.

The Lion is the first quarter of the shield, and repeated in the fourth, symbolises strength, and the unswerving determination to face the challenges of nationhood with courage and resourcefulness.

The Madonna Lily resting between the horns of the Crescent, (inspired by Murillo’s famous painting of the Immaculate Conception) indicates that Grenada has, since its sighting by Columbus, been dedicated to Mary of the Immaculate Conception and in whose honour the island was named Conception Island; the shield itself rests in a valley between two mountains, representing the spectacularly picturesque topography of the islands.

The Grand Etang Lake is also represented amid luxuriant green vegetation in the foreground of which is placed a sprig of cocoa, with a ripe pod balanced by a sprig of nutmeg also showing the ripe fruit. Growing from the vegetation on the left side of the shield is a stalk of maize flowering and bearing three ears of ripened cobs and on the right a banana tree bearing a full bunch. The fruits all represent Grenada’s traditional link with an agricultural economy; the cradle of their heritage.

The Helm is a royal helm, a gold helmet facing front and having seven gold bars across the visor, the interior lined purple. A star symbolic of our hopes, aspirations and ideals is placed to the forefront. The crest is made up of seven roses, representative of the seven parishes and set between the two sprays of bougainvillea, the national flower.

The supporters are, on the left, a Tattoo or Armadillo and on the right, the Grenada Dove, representative of the fauna on the islands.

Grenada’s motto, “Ever conscious of God, we aspire, build and advance as one people”, is itself sufficiently eloquent on the subject of those high ideals and principles upon which the nation is founded.

The Coat-of-Arms or Seal, adopted at Independence, replaced the one introduced in April 1903, with the Latin motto:”Clarior e Tenebris”. The seal appears on all official documents generally in black and white or, on more important occasions, in colour. 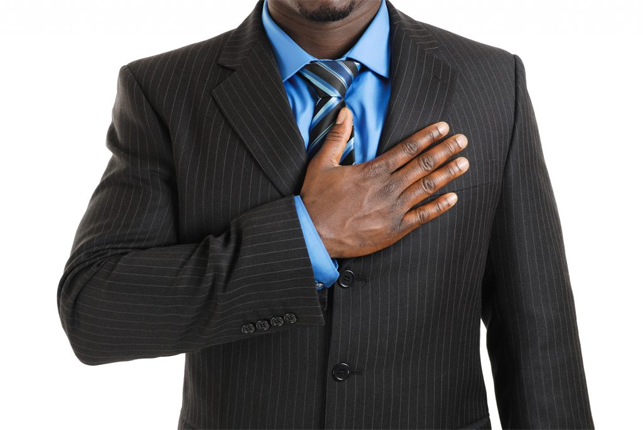 I pledge allegiance to my flag and to the country for which it stands, with Liberty, Justice and Equality for all. I pledge also that I shall defend and uphold the Honour, Dignity and Laws and Institutions of my country. 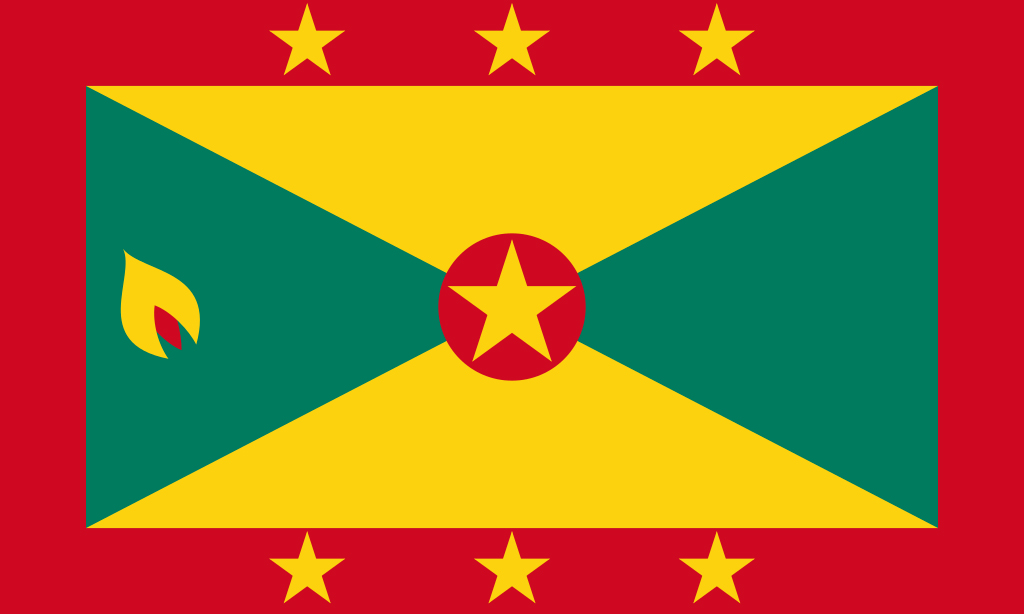 The National Flag of Grenada represents the distillation of a national effort to produce an emblem of a nation that can stand for all time and which incorporates simplicity of form, a pleasing visual quality and, not least, is symbolic of the confidence, hope and aspirations of a courageous people accepting the challenge of nationhood.

The components of the flag have the following significance:

The Flag of Grenada was designed by Anthony C. George of Soubise in the Parish of St. Andrew. Grenada received independence from the United Kingdom on February 7, 1974 and adopted its flag on this day.

The dimensions of the National Flag shall be in the following proportions:
Flown on land: five to three (5:3)
Flown on Sea: two to one (2:1)

The following code should be observed in relation to the flag: 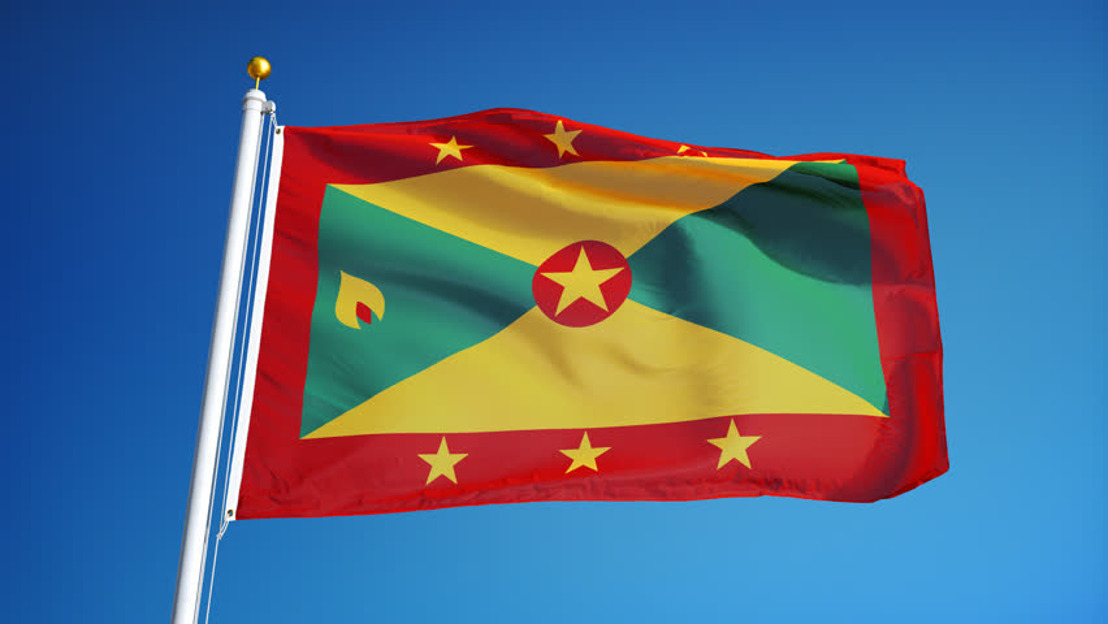 Hail Grenada, land of ours

We pledge ourselves to thee

Heads, hearts and hands in unity

To reach our destiny

Ever conscious of God

Being proud of our heritage

May we with faith and courage

As one people, one family 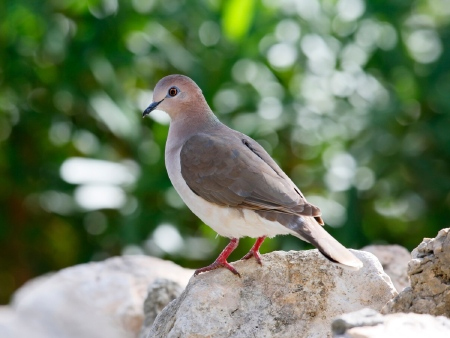 Overview on the Grenada Dove
The Grenada Dove (Leptotila wellsi), is found only on Grenada. Originally known as the Pea Dove or Well's Dove, it is the National Bird of Grenada. It is considered to be one of the most critically endangered doves in the world (Bird Life International 2000).

Conservation
In 1996, parts of Mt Hartman and Perseverance were declared a national park and a protected area, respectively. The pre-hurricane Ivan population increase may be in part the result of the protection of critical dove habitat areas. A recovery plan was drafted in 1997. In 1999, a workshop to develop a 4-year GEF-funded Dry Forest Biodiversity Conservation Project was drafted based on stakeholder input. 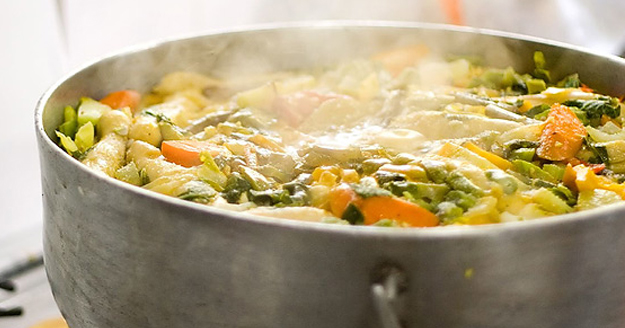 Grenada's national dish is called "Oil down". It is a simple, delicious and robust dish, which is very popular in local restaurants. It's a hearty onepot meal of salted meat, chicken, dumplings, breadfruit, callaloo - made from young dasheen leaves and other vegetables. The whole thing is stewed in coconut milk, herbs and spices to add even more flavour.

Try your hand at the national dish. 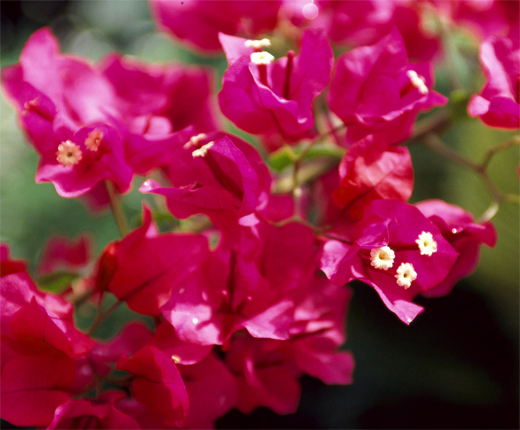 Grenada's national flower is the Bougainvillea (Nyctaginaceae), a genus of woody climbers. Bougainvilleas are widely-grown and popular tropical vines whose main attractions are very colorful bracts or leaves. These bracts are mistaken by many as the flowers of the plant because of their prominence. The flowers are actually the trumpet-like, small, white and inconspicuous items surrounded by the bracts. Each cluster of three flowers has three to six bracts surrounding them. Best outdoors, the plants can be used as hedges, or can be in pots, hanging from ceiling rafters or in hanging baskets.

The original plants came from South America, in the regions around Brazil, Peru and Argentina. Today they grow in the tropical areas of the Caribbean, Southeast Asia, Taiwan, Africa, the Mediterranean, Mexico, Pakistan, Panama, Australia, Hawaii and the southern United States. The French botanist, Philbert Commerson, discovered the plant and named it after his friend, Captain Louis A. Bougainvillea, an explorer, mathematician and lawyer from Canada.

Bougainvilleas are easy to grow and propagate, especially in areas with warm weather and plenty of sun. They come from the Nyetayinacce family of small trees, vines and shrubs. The vine itself is thorny and woody in most species, the most popular of which is the galabra or "paper flower," so called because of its paper-like bracts. Different species have different colored bracts like red, orange, white, purple, yellow and pink, among a few others. They grow in soil where most other plants do, up to 15 to 25 feet high and 25 to 35 wide.