Grenada, known as the ‘Isle of Spice,’ is one of the most magnificent islands in the West Indies. Unspoilt and exotic, it astounds visitors with its wildly jagged mountain peaks, hidden coves, spice plantations, and lush verdant rainforests. Its beaches are idyllic, with white or golden sand, palm trees, and the delicate aroma of the island’s native spices.

In addition to its scenery, Grenada offers culture, fun, and friendliness typical of the authentic Caribbean life – making Grenada the perfect place in which to live, work and play. 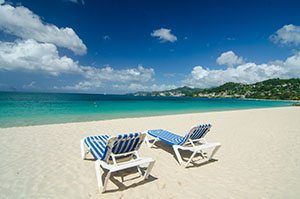 The nation of Grenada, measuring 344 km2, is composed of three key islands: Grenada and its sister islands Carriacou and Petite Martinique. Each is beautiful and rich in culture, historic sites, fresh culinary delights, and much more. Carriacou is only a 90-minute boat ride from St. George’s, the nation’s capital city.

Grenada was traditionally inhabited by Carib Indians who migrated from the South American mainland. The island was originally known as Camerhougue, but Christopher Columbus renamed it ‘Concepción Island’ when he visited it in 1498. Successive Spanish sailors found it to be so evocative of Andalucía’s green mountain scenery that they named it after the city of Granada.

Grenada was a French and British colony, but gained independence from the United Kingdom on February 7, 1974.

Grenada’s population is highly educated and has a very high literacy rate. St George’s University hosts 6,000 students from over 140 countries, offers faculties of Medicine and Veterinary Science, and has been operating for thirty-five years. In addition, a full medical teaching hospital will be developed in the near future.

Large-scale tourism is a recent phenomenon, and Grenada is largely undiscovered, unspoilt and full of opportunity.